A dialogue with Arturo Obegero on the rituals and aesthetics of Spain. Cristóbal Balenciaga passed away in 1972, but his legacy prevails like a relationship between a bull and a matador

Cristóbal Balenciaga Eizaguirre, the Basque fashion designer born in 1895 in Getaria, northern Spain, sees the light in a proletarian family. His father, a fisherman, passed away when he was just eleven years old. His mother was a seamstress working at Palacio Aldamar, the summer residence of Blanca Carrillo de Albornoz y Elio, Marquise of Casa-Torres (who would be the first patron and supporter of Balenciaga when he opens his first atelier in San Sebastian at only twenty-two years old). The coastal Basque location is soon followed by boutiques in Madrid and Barcelona. In 1937, he takes to Paris, leaving the horrors of the Spanish Civil War behind. He opens his showroom on 10 Avenue George V and explodes internationally. Balenciaga’s style is imbued with all the contradictions and the transitions of nineteenth-century Spain — from the years of Francoism to the advent of democracy under the protection of Juan Carlos of Bourbon. The 17th-century metaphysics of Juan de la Cruz, Calderón de la Barca and Francisco de Zurbáran mix with Dalí’s surrealist energy and Antoni Tàpies’ informalism.

Azzedine Alaïa Collector. Alaïa and Balenciaga, Sculptors of Shape, curated by Olivier Saillard, opened in Paris in January 2020 at the Association Azzedine Alaïa in Paris. The theme of the show dates back to the Master’s retirement from the industry in 1968, the year that Balenciaga decided to donate some of his timeless pieces to his collaborators and employees. Later, Mademoiselle Renée, who was his Deputy General Manager for decades, managed all that remained in clothes and textiles. Among others, Mademoiselle Renée called Azzedine Alaïa and gave him the freedom to choose a selection of creations for the Tunisian couturier to rework and bring new life to with his sensibility and skillful hands.

“Cristóbal Balenciaga’s Spanish melancholy” — observes Arturo Obegero — ”it’s a nocturnal mood, the waves, and the textile boxes, the frozen drapes, centrifugal and without gravity. I am reminded of a 1967 Vogue USA cover, Balenciaga’s essential nature captured in one shot by Irving Penn. Flamenco singing. Pink and white are succinct, or indeed etched in, even deeper than black.”

Arturo Obegero, a 26-year-old young Spanish fashion designer based in Paris, echoes Don Cristóbal’s modernist drive. The volume and scale with which Balenciaga utilizes fabrics remind him of the constructivism of the sculptor Eduardo Chillida — from the Basque region too, San Sebastian — where he was born in 1924. Arturo is linked to the Master of Getaria in his need for research and metathesis, aimed at tearing down barriers. Not quite real but not quite fantasy, he brings silhouettes to life on the body; exaggerated volumes adding drama. The outfits are emotional mathematics, reflected in their sexual counterparts — a duality that generates ambiguity and makes the line between female and male indistinguishable, even as they remain identifiable. This duality is also found in the meshing of the severity of northern Spain and the joyful exuberance of the south of the country. Light and shadows.

“My roots were the first thing to nourish my creative sphere,” says Obegero. “I translated this heritage into clothing that combines structure and fluidity, adding a second skin with the classic volumes of haute couture. You could call my work ‘démi-couture’. I personally follow every step of it, from the birth of the design to the various stages of production, in the Paris workshop that I share with another designer. The rituals and aesthetics of bullfighting have fed my imagination. You can find it in the fitted jackets, cut out like origami with high welt pockets, and the figure-hugging tops with deep slits. The trousers dramatically accentuate the waist, as high as the matadores’. Leather belts mark the limit. The sleeves of the cropped jackets are curved and elongated. It is a compendium of comfortable pieces to wear, free of casting and gluing materials that can prevent or restrict movement. I use woolen

fabrics, even technical jersey, satin silk and velvet. The focal point is strong tailoring, free of embellishments and decorative or embroidered motifs.”

In the great world of Cristóbal Balenciaga, Mona Bismarck appeared — the crystal idol with the sapphire eyes as Cecil Beaton had described her. As soon as she heard of the definitive closure of Don Cristóbal’s Parisian atelier, she spent three days locked in her Capri bedroom, alone. Balenciaga had understood that the student riots of ‘68 marked the end of an entire era and a way of thinking about reality. Enter Millicent Rogers, the many-husband heiress to Standard Oil who takes refuge in New Mexico among the Navajo; the inevitable allure of Babe Paley and Gloria Guinness, Pauline de Rothschild and Marella Agnelli.

The prelude to the revolution is the ligne tonneau, 1947. 1951 sees a complete metamorphosis of the silhouette, with the addition of wider shoulders and the abandonment of cinched waists. Rhythm becomes radicalized. In the two years that follow, it’s all about the ‘balloon’ jacket. Then, the tunic dress in ‘55, the ‘cocoon’ coat, the ‘balloon’ skirt, and the ‘baby doll’ and ‘sack dresses’ in 1957. The 1959 Empire line includes high-waisted dresses and kimono coats. Marquise of Llanzol María Sonsoles is the muse and confidant of Cristóbal’s initial parable, and the leading role of a liaison dangereuse in the 1940s which made Madrid’s upper echelons tremble.

The love of the noblewoman for Francisco Franco’s brother-in-law, Foreign Minister Ramón Serrano Suñer, was a scandal reminiscent of a Greek tragedy, and the ruin of Suñer’s political career. Balenciaga takes on a different path thanks to his birth in the Basque country — a place with a strong local culture. A stylistic figure performed by subtractions. Color turns into geometry. A good fashion designer must be an architect for the patterns, a sculptor for the shape, a painter for the designs, a musician for the harmony, and a philosopher for the fit, Don Cristóbal had affirmed.

Obegero chose Balenciaga as his guide. He appreciates Riccardo Tisci’s experimentation for Givenchy, considers Pierpaolo Piccioli’s couture frontier for Valentino as a point of reference, and feels an affinity with the darkness of Rick Owens. Obegero employs surgical cuts and asymmetries his Palmira collection, dedicated to and named after his grandmother. Arturo, like Balenciaga, comes from the north of Spain and seeks the same rigor and geometric purity of the Maestro.

His story begins within a matriarchal context governed with affection and the strictness of his grandmother, whose portrait sits in the family home. Dressed in a fringed black shawl, she overlooks the living room with pride. “Doña Palmira was the boss, the cornerstone and the engine of a closed circle, where women were the protagonists.” For Obegero, black is freedom — a matter of a clean slate and abstraction which favors a genderless connotation that evades pre-established fields and stylistic orthodoxies. Balenciaga, l’oeuvre au noir was the title of an exhibition held between 2017 and 2018 at the Musée Bourdelle, Paris which followed the common thread of this chromatic note in Balenciaga’s work. Black as a compositional canon suspended between folklore and the Spain of his childhood, monastic and unattainable. Black as Obegero’s unique color choice. “The scenes and beauty of my country” — says Arturo Obegero — ”have defined my creative parable — my family, all having coffee together in the living room, dressed in black — only sometimes interrupted by shirts in blinding white — a bit like a frame in a play by García Lorca. Mystery and composure; the purified austerity of the Golden Age of painting, of Zurbáran and Alonso Sánchez Coello, of Juan Pantoja de la Cruz and Diego Velázquez.

The world of bullfighting — I met with the most famous torero tailor in Spain, Antonio López, who instructed me with the details of this remote tradition, including the manufacturing principles on which it’s based on.” The erotic undertones of the ‘matador traje’ have evolved into the silhouettes of the vest-jackets, almost painted on, and the rectangular necklines, a mix of Bauhaus and Spanish Habsburg. “That’s why everything is black. Black is the absolute color. I didn’t choose it only because it embodies the ostentatious sobriety of Spain, but it’s also as a tribute to my grandfather, who left us three weeks before I could finish this collection.”

Among other sources of inspiration, the Palmira collection reinterprets a 2011 film by Pedro Almodóvar, The Skin I Live In, based on Thierry Jonquet’s novel Tarantula. A story of loss and transformation. In addition to the ever-present black, it is perhaps the alchemic dimension and the creative hunger of a deviant demiurge that make this film interesting in the eyes of Arturo. The film stars Antonio Banderas, who has just received an Academy Award nomination for Best Actor for his work in Almodóvar’s latest film, Dolor y Gloria, which was also nominated in the Foreign Film category.

“I am fascinated by the dark and brutal romanticism of this film. A tension that turns into obsession and a sexual deviation. Everything speaks to me — how it’s filmed, the soundtrack by Alberto Iglesias, a collaborator of Pedro Almodóvar (Basque, from San Sebastián) — the set design, the artistic references. The Skin I Live In has become a starting point for me. In written correspondence with Almodóvar — who sent me research materials, a signed book, the script, texts, and photographs that were taken on set — there is a metaphor comparing the relationship between the characters in the film and the deadly dance between bull and bullfighter.”

Music and dance. The tormented Spanish heart of Flamenco. Flamenco means energy, power, sensuality. Continuous movements suspended in a vacuum. Feet beating on wooden boards. A trick of hands and body with remote gypsy roots. Antonio Gades, a dancer, choreographer and Spanish communist politician who died in 2004, is a never-ending source of inspiration for Obegero, who admires his passionate temperament and his severe pithiness on the stage. Gades reached international fame alongside Cristina Hoyos thanks to the movie adaptations of his ballets — primarily Carmen —directed by Carlos Saura. “Flamenco embraces every aspect of our life,” concludes Arturo Obegero. “From the celebration of life and love to the expressions of sadness and death. I have tried to tell them all through clothes.” 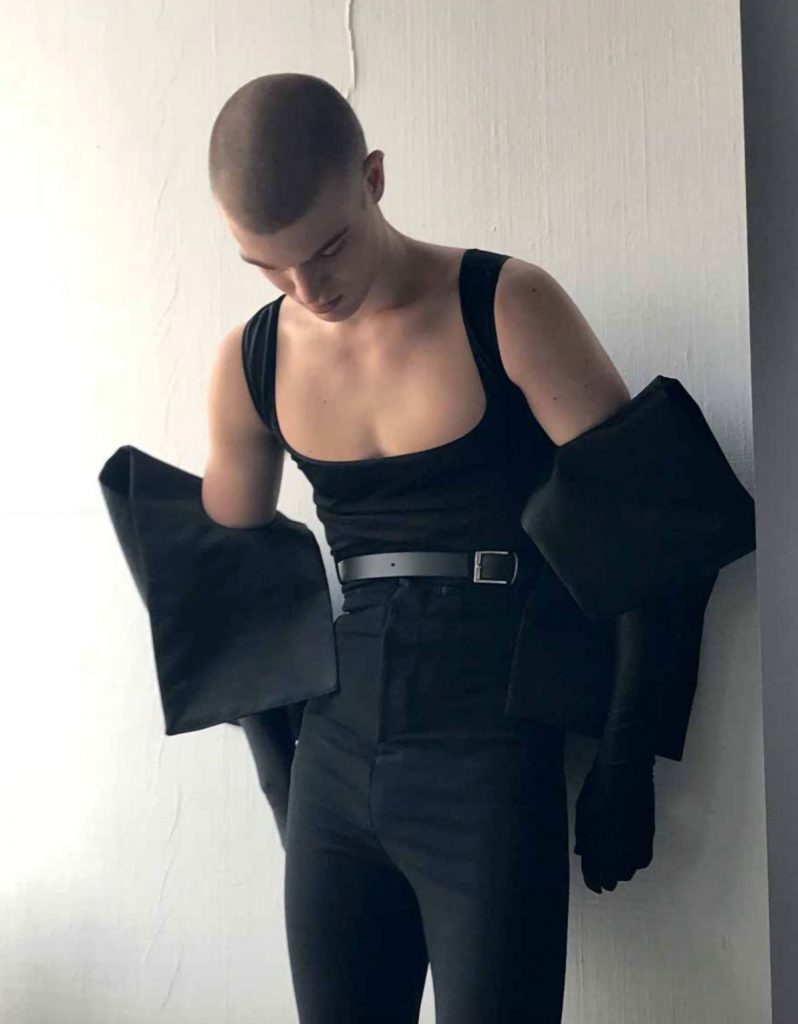 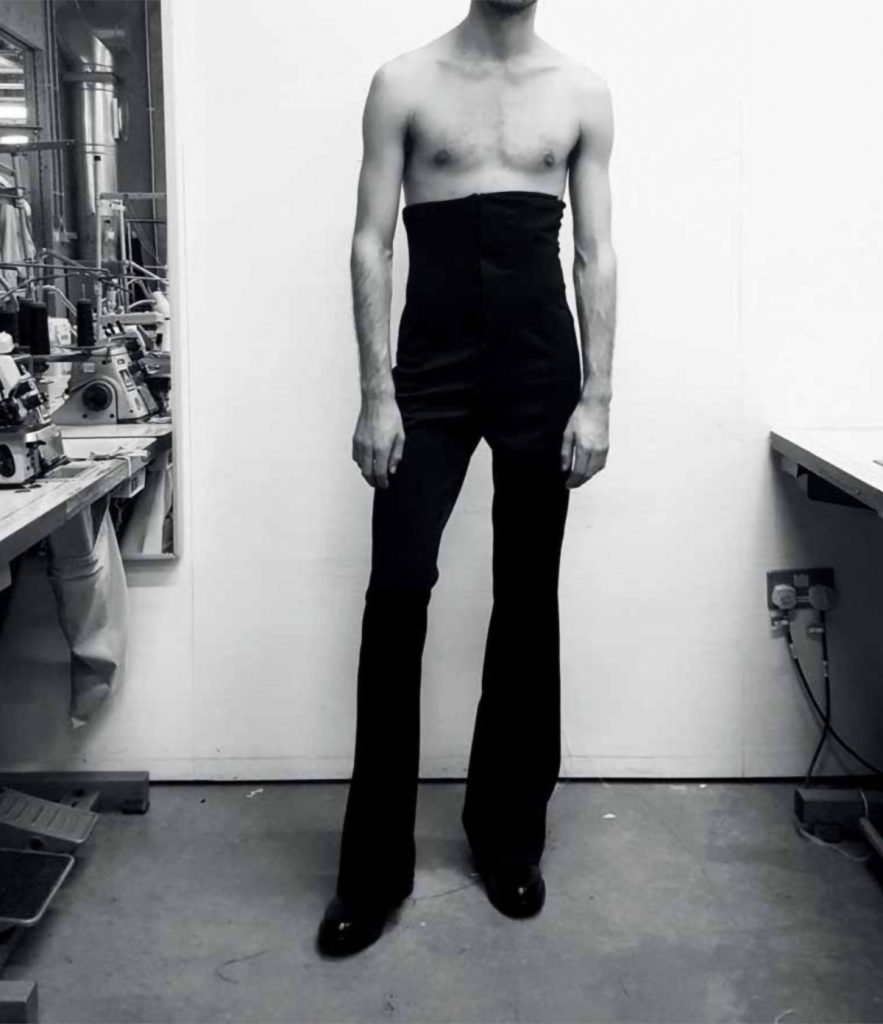 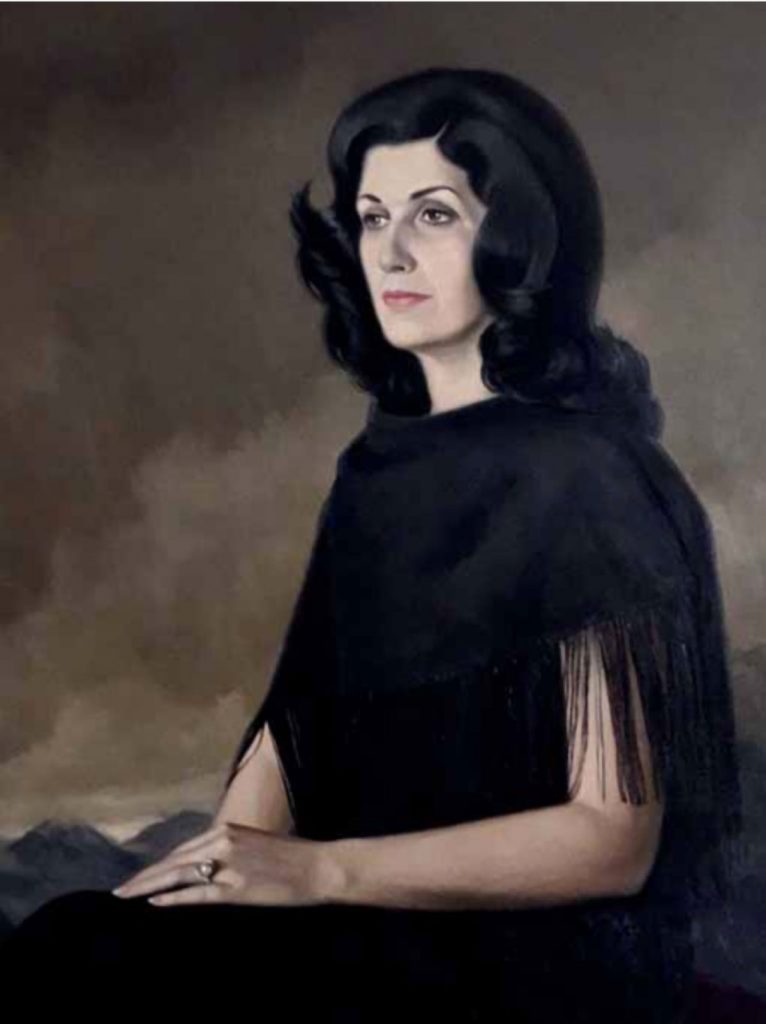 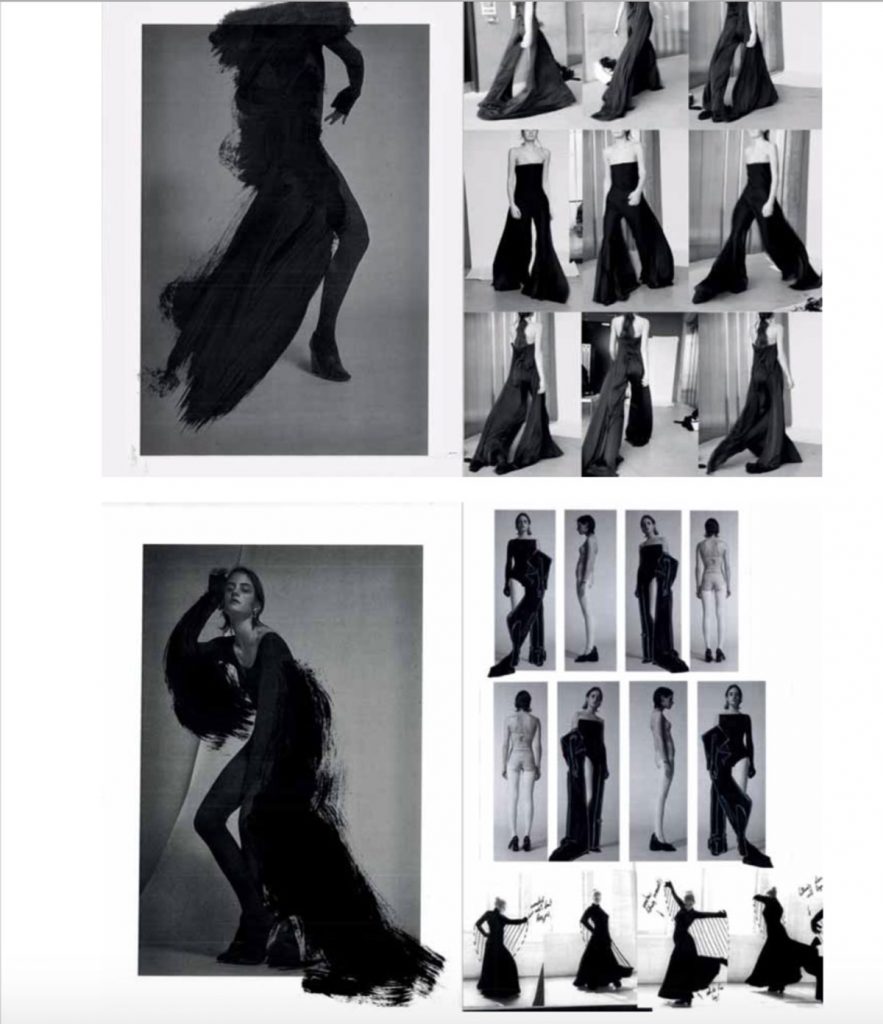