Indian craft is beyond just supply — in conversation with Harikrishnan on craft, cuts, and latex

20th-century English photographer and photojournalist, Bill Brandt captured the human form he used a wide-angle lens in close-up causing body shapes to appear distorted. Since the late 1970s, sculptor Peter Shelton has made work primarily about the body. His work mimics the curvature of flesh and employs familiar structures as anatomical stand-ins distorting the human concept of the body. Like Shelton, Dutch street-photographer Willelm Jonkers uses an extreme wide-angled lens to capture his subjects who often appear distorted and super-natural.  When twenty-six year-old MA Fashion Design Harikrishnan graduate at the London College of Fashion,  his relationship with the body and distortion were at play. Presenting ballooning leg floatation devices made from 30-odd panels of latex and inflated with air, a parade of sporty men stumbled down the LCF Master’s degree show this February. «I wanted to capture the body from the perspective of my dog and how he sees the world around him».

Originally from Kerala, a state in southern India, Harikrishnan undertook a bachelor’s degree in Fashion Design at the National Institute of Fashion Technology in India before assisting Suket Dhir, the winner of the Woolmark Prize, in Delhi in 2015. For two years he worked in India’s fashion design capital working on the liaison with Sakes, Harvey Nichols and other retailers, collection planning and working on fashion retail as well as textiles before applying to the master’s degree at LCF. For his graduation collection, Hari wanted to open up a new perspective on clothing and how to wear them, which he would not have been able to experiment with commercially.

When Harikrishnan was younger, he became a professional bodybuilder for over five years after his teens and at the beginning of his bachelor’s degree. At the age of five, «I started picking up charcoal and drawing Hindi Gods and godly figures. At the age of ten, my father gifted me a book on the human anatomy called ‘The Nude Study’. And there were a lot of nudes so I started imitating and sketching them». Fashion hadn’t been part of his childhood as he says, «the place I come from Kerala, has no fashion. When you think of fashion, the images that come to mind are that of celebrities, icons, self-expression and culture. In Kerala, I grew up seeing everyone wearing white sarongs and white shirts». A staple of his childhood, the room for self-expression when it came to clothing resided in the subtle striping or checking of men’s shirts.

«Fashion was the only thing I could do where I could sketch and continue my interest for the human body. When I quit body building I was looking for a medium to express myself.  The next choice was fashion. I felt that fashion was a medium for expression, I considered clothes as a canvas and I had this fascination for the body and proportions». Where India had a commercial approach to design education, London – more specifically the London College of Fashion – was on the complete other spectrum, looking for talent with the right amount of ambition to succeed in a building just off Oxford Circus. Having failed his first attempt at the collection, he came back a second time with a completely fresh perspective, banishing any prior ideas he had envisaged for his final collection. «I started from scratch. I thought, okay, I am a baby, I am just going to start absorbing things around me and start fresh in 2018».

Deciding to create a collection based on human imagery from the perception of his 14 inch family pug, looking up at the world around him, he then researched into various takes on human imagery over hundreds of years. «I looked at pre-historic times to the current computer-age and how designers play with image and distort imagery. I looked at the photography age and how we used light and shadow or angles to create distortion. In the new age, how the new artists like Jean-Paul Goude were doing distortions».

«When you think from a dog’s perspective, it depends on the height of the dog, in my case he’s small and is seeing me as a giant figure walking around» he says. «I was re-reimagining the world around me with distortion in the same way that artists and photographers did in the 80s and 90s». Among two-piece suits (vests and shorts) made from hand-woven beads, and cubic bolero jackets, are swollen testicle-like latex pants. Having collaborated with the UK’s leading rubber manufacturer, Supatex and 4D-Rubber: «They supplied me with dead-stock materials and offcuts from their factory for me to work on the toile and experiment with. All the black colours were made from dead-stock fabrics but the white colours had to be specially made». Each look was created from one base structure and then, for want of a better word, ‘blown-up’.

The collection was split into three sections, «craft, cut and latex», with the importance of the cut at the heart of the idea. «You always have the risk of looking like a blob if you don’t cut latex properly»; he explains of the green and white striped creations, he paired with finely cut tailoring. «It’s like pinching and putting shape into clay, like body building, except Latex is unpredictable», until you blow it up and can see the extent of the damage evidently.

Combining his craft with various materials, he worked with wool, latex and wood. «If your familiar with latex, you have to stick it by hand and hand-cut it juxtaposing using a lap seam with 24 panels on the outer layer with the inner four panels, adding up to almost 30 panels for one pair».  Now the giant testicle-figures are the only image that comes to mind when he sees his collection having never imagined the reaction beforehand. «I just had elegant round forms», he laughs. «I was taking my time to carve the panels so that when you put 30 panels in you’re just pinching and pinching so that the bottom is round and the top is as close to the body as possible».

His main focus is the craft element, which saw him collaborate with a 200-year-old artisan community in Channapatna, India. During his thirty-day stay, he trained women to adapt their woodturning skills to make linked beading for his collection. Whilst there, he created chess-like figurines to envisage how the collection would sit alongside itself in a white space. Each one was handmade from wood, plastered in an organic lacquer that is then turned and spun over the wooden surfaces in the same technique used to create their beads.

«The textile creation was my idea to bring to the community that is primarily trained in weaving the beads and making jewelry out of them». Inspired by the Bauhaus movement in which art began to disappear through industrialization, before combining the art world with industrialization coined by Germany’s bustling art colleges, leaving room for a new movement. In a similar sense, this collection of artisans has industrialized a century-old trade in combining machines to the repetitive liaison of feeding dyed wooden beads with their hands and spinning the wood on a machine with their feet as the lacquer polishes. «The lacquered texture is very similar to that of latex», he says before showing me a video documenting their process.

«There was difficulty with the language barrier as they do not speak my language so we tried to create the silhouettes as simply as possible». When creating the beaded vests and matching shorts; the same process was applied, amounting to four weeks of shaping, dying and polishing and weaving the individual beads in a particular pattern. For this, Harikrishnan merged white stripes with green-coloured beads, whilst respecting the general folds and creases and lumps and bumps of the human body. Whilst the beads and colours seem meticulously coordinated and handpicked, Hari happens to be colour-blind which was a challenge in the initial stages of the process.

«I am an international student here so before I work on anything else, I have to sort out my VISA». According to the UK Council for International Student Affairs over 20 % of undergraduate students in the UK are international students studying abroad and almost 40 % of post-graduate students in the UK are also international students. «London offers acceptance and appreciation for craft and creativity that is not available anywhere else in the world. I could not do this kind of work in India», says Hari. «I’m trying to approach the British Fashion Council to see how we can sort it out». The group of artisans in India have not been affected by Covid-19 as of yet so he is waiting to get back out there to produce some more work with them moving forward. «Making beads takes a lot of time, sometimes it can take between four to five weeks and that’s before you start weaving them», he says. Harikrishnan is working from his London apartment finding new techniques and methods he would like to incorporate into his next collection as well as working on his mental health remaining active in a time when the fashion industry might have changed forever. «In case of an absolute emergency, you absolutely can use the pants as floating devices», — though you would probably sink trying to blow yourself up. «I’ll keep working on that». 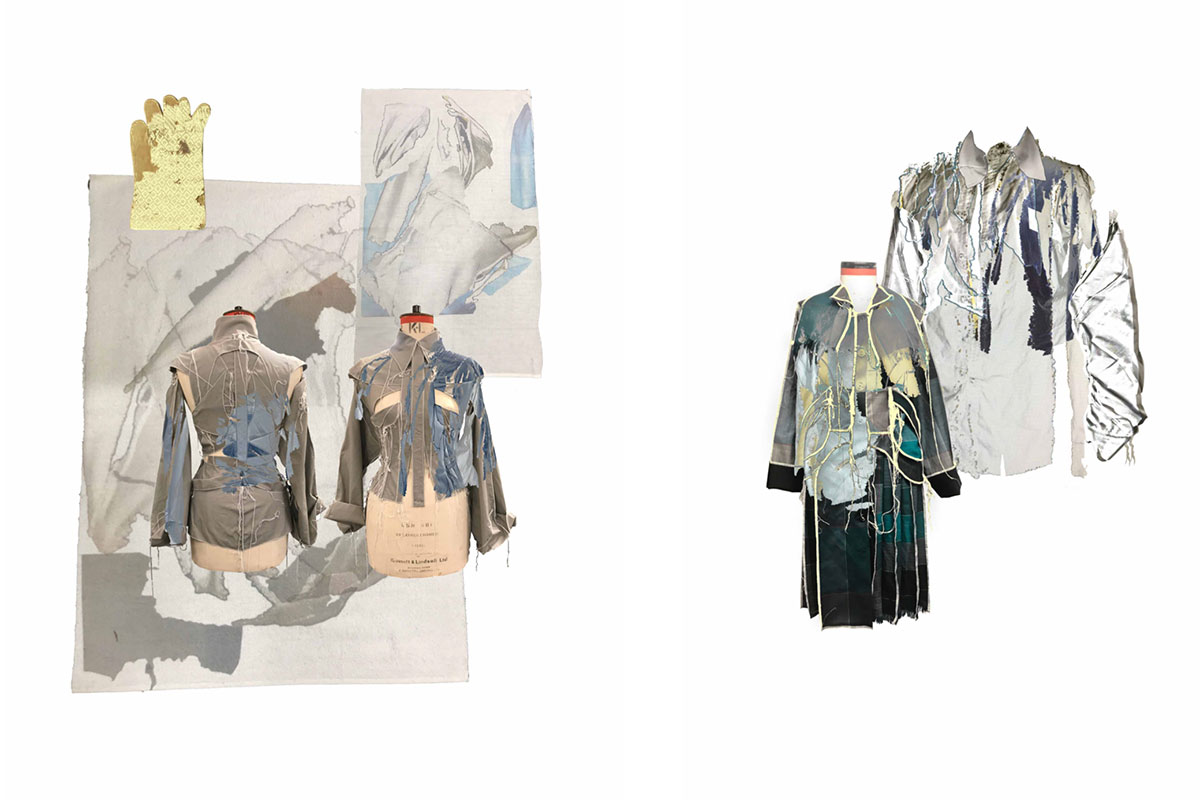 The future of fashion may just be in virtual technologies. In conversation with the modular augmented reality designer on upcycling vintage

Terraforma — exploring the sustainable festival in a post-virus world

In conversation with Ruggero Pietromarchi and Leone Manfredini, the Curator and Sustainability Director behind Terraforma, on the festival’s approach to sustainability post-pandemic