Jacob Ludwig Carl Grimm and Wilhelm Carl Grimm, two folklorists and linguists from Germany, a duo who birthed the study of folklore and the brothers who coined and compiled Grimm’s Fairy Tales, an anthology of legends, fables and lores passed on from generation to generation through oral storytelling. In Dior, Maria Grazia Chiuri splatters spots of petals in red and pink on a pair of pants, suit, and a cape with a hood that resonates Little Red Riding Hood. Dior exerts fairy tales, the features of characters that may range from elves, goblins, wizards and fairies to kings, queens, princes and princesses entangled in stories often directed at children to teach morals, which transform as outlets to work through one’s unconscious and dilemmas in life, paving solutions to approach the junctions through positivity, the teacher of conquering the hardbacks and challenges in life with the grant of success to conclude the journey. Bruno Bettleheim, a psychologist from the United States and born in Austria, worked with children who had experienced distress in their emotions. Through his work The Uses of Enchantment: The Meaning and Importance of Fairy Tales, his analysis of fairy tales by the perspective of Sigmeund Freud’s Psychoanalysis, a method to investigate the mind and the unconscious to release the repression of emotions, Bettleheim permits the readers to ponder that should one hopes to live in the consciousness of one’s existence, then finding the meaning in their lives poses as an achievement entwined with adversity. To forge ahead with his purpose, «the unrealistic nature of these tales, which narrow-minded rationalists object to, is an important device, because it makes obvious that the fairy tales’ concern is not useful information about the external world, but the inner process taking place in an individual». Thus, Sheila Kohler, a professor of Creative Writing at Princeton University, writes that storytelling of fairy tales, while the children may position themselves at the receiving end, enables the transaction of comfort within the perimeters of one’s home, whether in its physicality or through emotions, the repetition of themes and words, as the reader reads the stories out loud, soothes the listener, nurtures their imagination, and dissipates their fears.

To demonstrate the features of fairy tales in Dior, Chiuri employs the choreography of Sharon Eyal, the co-founder, co-artistic director and choreographer of L-E-V, the Hebrew of heart, to portray poetry through a set of dance steps via eight dancers. Poetry, the literature that concentrates on one’s awareness of their experience through imagination, language, and the arrangement of meaning, rhythm, and sound of words, structure a stanza, the block of lines and meter through beats of syllables, the cadence of freeform, an option, for the lack of formality. In poetry, imagery arouses the readers sights, tastes, smells, feelings and emotions, the procurement of one’s attention to their sensations and the division of seven classes: visual imagery forms what the narrator sees in the poetry, the contrast, palette, shapes and patterns, the metaphors, similes and personifications; auditory imagery appeals to what the readers hear in the poetry, the adoption of music, sound, noises and silence, the imitation of sounds and onomatopoeia; gustatory imagery describes what the narrator tastes, the inclusion of savoriness, saltiness, sweetness, sourness and spiciness, the recollection of a memory through taste; tactile imagery touches on the sensation the narrator feels, the descriptions of temperature, texture, weather and atmosphere; olfactory imagery appeals to the what the readers may smell from the poetry, the employment of fragrance in the lyricism; kinesthetic imagery gravitates to the motion the narrator feels, the speed of a vehicle, the tempo in stride and the movement of the objects; and organic imagery prowls on the sensations the narrator nestles inside, the signal of fatigue, thirst, hunger, fear, love and despair. In Dior’s set design, the evocation of visual, tactile, olfactory and organic imageries through the Hall of Mirrors, a room at the Palace of Versailles in France, where gold sprawls across the marble pillars, floors, ceilings and statues and the palette seeps through the paintings and chandeliers; the punctuation of the installation of Silvia Giambrone, an artist of performance, installation, sculpture and sound from Italy, a myriad of mirrors in gold and metal frame, white wax, and black thorns poking out of the mirrors, the design patterns Lewis Carroll’s Alice in Wonderland, the catchphrase mirror, mirror on the wall, who is the fairest of them all? from the evil queen in Snow White and the spindles covered in thorns to prick someone’s finger for the sleeping curse to take effect in the narratives of the Dior’s fairy tales through movement and fabrics.

The lights dim to cast shadows from the windows on the other side, drawn curtains allow the moon to spill its light onto the runway, the eight dancers, through the choreography of Eyal, move in synchronicity to one another, their glide and tiptoes in sync with the bend and break of their arms, legs, thighs, hips, shoulders, neck and torso, starting their routine from the forest where the bed of leaves rustles under their steps onto the runaway where they dance before the mirrors of thorns and as an ensemble while they glide from one end of the runway to the other, the movement of poetry and the auditory, gustatory, and kinesthetic imageries. The folklore of Dior enclaves the toy soldier’s uniform that transforms into a series of blue cashmere coats embellished with touches of red and white, lamé and Lurex jacquards over silhouette to finish with a metallic shine, fabrics of gold and silver, skirts and jackets in black entangled in the cannage motif, red to drape across capes and raincoats with hoods, tartans via a rose motif, evening gowns in layered tulles in froth, white collars, plastrons in broderie anglaise, and white bobby socks.

To helm the compendium’s introduction, Chiuri taps five illustrators to produce five teasers in animation, the arousal of interest via social media platforms through art to engage the viewers’ attention. Femininity in action and animation: Teresa Cherubini, born in Italy and raised in the United States, illustrates a copy of herself, almost shaved and orange hair with a pair of eyeglasses, through a series of comics where she stumbles and falls asleep, journeys as a princess of myths, a resemblance to Ariel of Little Mermaid and Cinderella in two storylines, and ends with her character displaying the process of drawing; Aisha Madu, having Dutch and Nigerian descent, interprets the unicorn as a fly with four hoops and no eyes as she rides it without clothes, the rainbow sky and stars passing by, before she lies down and let her hair catches the wind; Noriko Okaku, born in Japan and works in London, favors collage and employs a sleeping curse in her teaser as her character summons herself from the ground in a purple cloak, affording a glimpse to her lack of a face, and traverses the land of rainbow, duplicity of self, pineapple and desert until she reaches for a rope and spells sleep, and so she does; Bárbara Cerro, lives in Buenos Aires, studied and practices filmmaking and airs her snippet through a woman in a tub of black water, browsing through her smartphone until it plops in the water, joins the pool, swirling into a flower that blooms with her as the bud, emerges into a lake of women without clothes, embracing sensuality, party and pleasure, and meets a partner where their eyes kiss until the pair of eyes in rainbow become an eye in black; Marion Fayolle, grew up in the Ardèche region of France and lives in the Drôme region, draws bodies and relationships and showcases their functions through her teaser where she blows an eyeball, rolls it on the hallway until it passes by five characters, stops and drops, and the five characters hop on the eyeball and wait for the other eyeball before jumping at the heads of three other characters. The shift into maturity through animations, folklores, legends, myths, poetry and fairy tales, the archetypes of a land composed of magic and forests, the birth of self-awareness and femininity, and the anatomy of magic through Maria Grazia Chiuri in Dior’s anthology.

For the Autumn-Winter 2021-2022 ready-to-wear collection, Maria Grazia Chiuri, the Creative Director of Dior, chooses a territory where the time and space dimensions dissipates: suggestions and intentions give form and contours to an articulated constellation of clothes and accessories, drawing her influences from the world of fairy tales.

«Even if nobody cares about street lamps, if we isolate them, when we can see that there are real pieces of design»

The authority of an artist, Alice Merton: «I hate finding compromises»

Berlin-based singer-songwriter, Alice Merton opens up about her musical influences, life after releasing her debut single 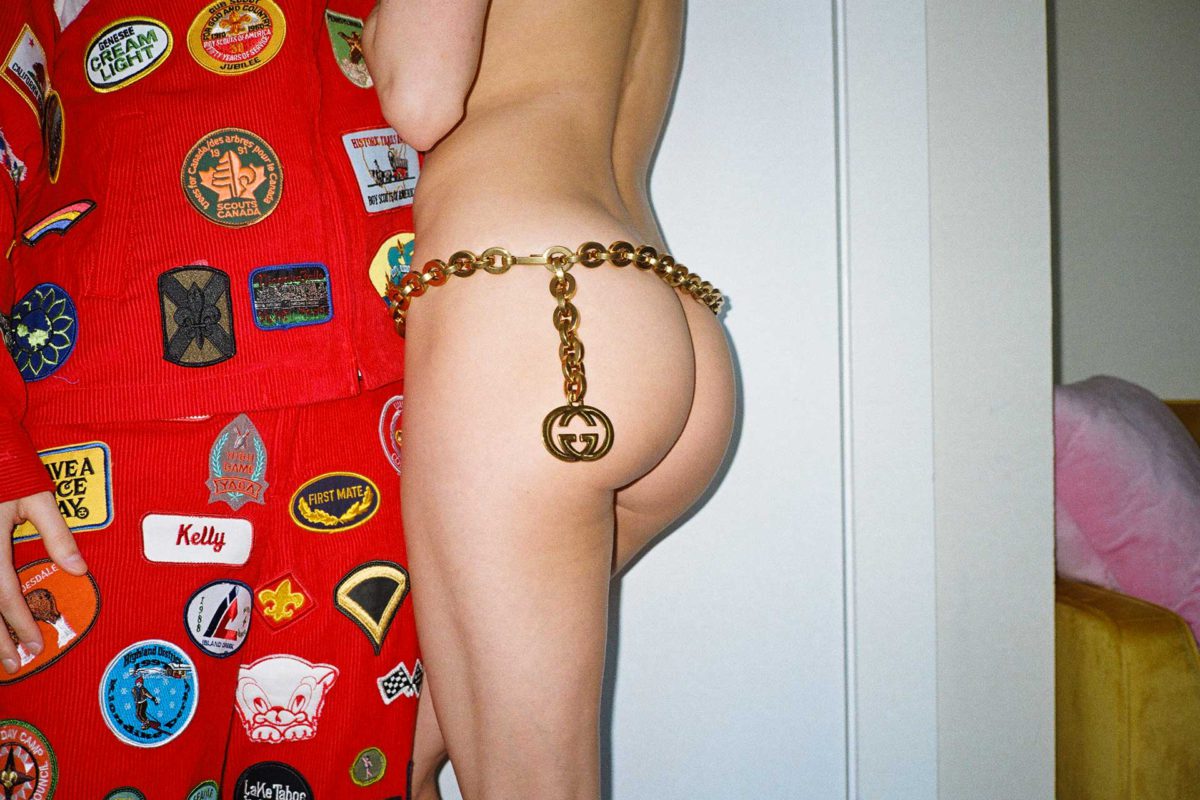