Among centuries-old olive trees and vineyards, geraniums, hydrangeas, bougainvillea, and prickly pears is a building that is the safeguard of local art and culture in Oliena

The city is a lie. A one hour flight is enough to see the truth. It is not concrete. It is made of rocks and promontories, wind and stormy sea, thousands of year-old mountains where the golden eagles rule. Men are not the leading force here, they are just contemplators, not manipulators. It is a continuation of nature, it moves there with ease, it reaps the fruits without dominating it. Rousseau and the myth of the good savage are back: where is the progress — in skyscrapers or in shrubs? These become the vexations of the mind, when from the center of Milan you then throw yourself at the foot of the Supramonte, in Barbagia, the center of Sardinia for a few days.

Along the borders of the highlands Oliena, Orgosolo, Urzulei, Baunei, and Dorgali are scattered. It was the Romans who named this region of Gennargentu Barbaria — here the indigenous population had found refuge and remained independent. Military expeditions sent to subjugate the area were proven useless. In 231 BC the Roman consul Marco Pomponio Matone brought the hounds to track down the rebels in the mountains near Fonni — the Fonnese Shepherd was henceforth born from the cross with the local dogs.

The borders of the mountains follow the upper course of the Cedrino northwards, and the Olai stream southwards — over the millennia the rivers have eroded the limestone rocks creating gorges and chasms. The water flows to the sea and as far as the caves of Bue Marino, which can be admired by tourists from boats. For speleologists there is Su Gologone, a spring in the Oliena area – with an average flow rate of 500 liters of water per second, it is the first spring in Sardinia.

Su Gologone is the name of the Experience Hotel which is based in Oliena, on the slopes of the Supramonte. The sea can be found only twenty–five kilometres away. Among centuries–old olive trees and vineyards, geraniums, hydrangeas, bougainvillea and prickly pears, a building, that is the safeguard of local art and culture, had been developed on several levels. What was a restaurant in 1967, opened by the Palimodde family to animate an isolated town and pay homage to patrons and tourists with local products, has become a hotel under the guidance of Giovanna Palimodde.

She welcomes every guest with a smile. She makes sure that the stay is not just an opportunity for recreation for those who have become accustomed to living in the city. She wants to be sure that the holidaymakers know what Barbagia is, know its culture, appreciate its colours, food, traditional clothes, trees, the fruits of nature – and miss it once they leave.

The hotel is a city. It is not easy to find your bearings. Along the paths and stairs uphill and downhill that connect each part of the structure, there are stones to mark the path with engraved drawings made by the hand of the owner. The rooms are marked by Juniper wood, terracotta and inlay . Every detail of the hotel reflects the character of its geographical location. Scattered along the property, you find suggestive spaces — on the Terrazzo del Sogni and the Terrazzo dei Desideri, designed by Giovanna, the wind comes from the mountain and the sunset has a colour never seen before. Below there is the vegetable garden. Around you people eat, drink and converse.

Giovanna is an artist, as well as an entrepreneur. She paints and collects works of art, which are located inside the hotel. They are not contained in display cases, the art is accessible to all. Among the artists you can find the work of Liliana Cano, of whom Giovanna Palimodde is very fond. The cosmopolitan painter from Sassari, born in Gorizia to Sardinian parents and an honorary citizen of Oliena, returned to live in Sardinia at the age of 70, after spending twenty years in France.

Liliana Cano still lives here at almost a hundred years of age. She was inspired by literature and religion, but also by the popular traditions of Sardinia and Provence. She prefers to paint with acrylic colours large surfaces, panels, sheets or even murals. In addition to the paintings, the collection of traditional Sardinian clothes and African masks can be found along the corridors of the hotel. 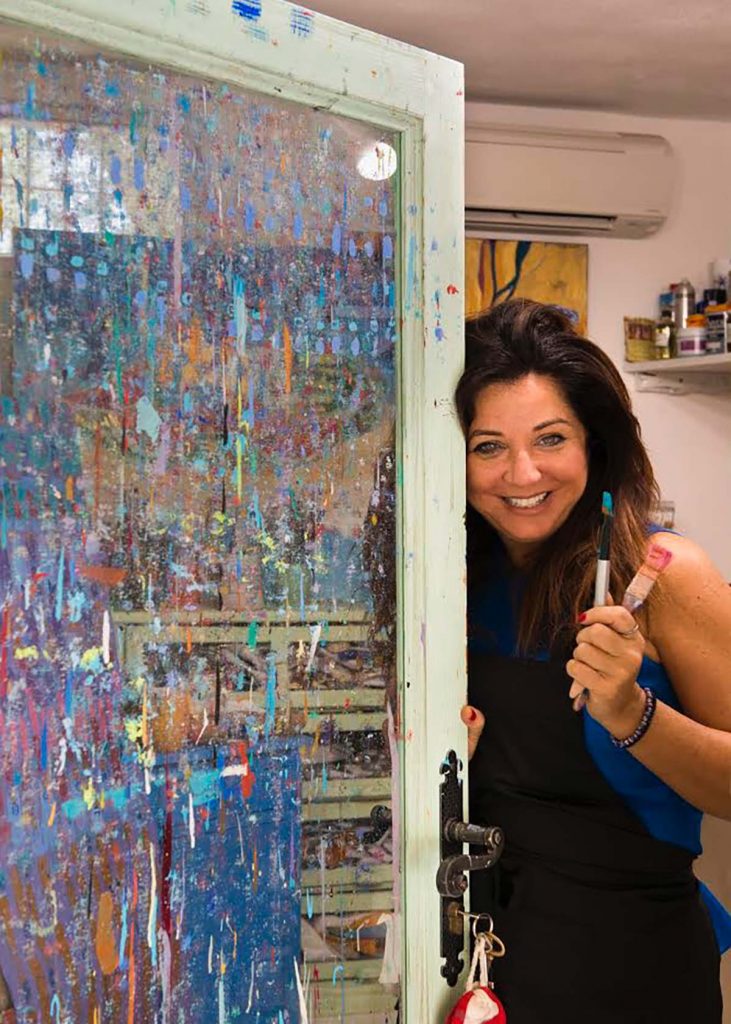 Le Botteghe Su Gologone is a brand of home accessories that was created in 2008. It is the result of the interpretation of a land capable of preserving its tradition. The outcome is the creation of six artisan workshops, design workshops, ceramics, painting and embroidery, wood and iron processing created inside the old stables of the Experience Hotel Su Gologone in Oliena. A resource for the whole of Oliena. Giovanna employs over seventy people. The project celebrates the knowledge of origins through contemporary creativity.

The hands of the embroiderers, painters and craftsmen design and weave the thread that unites the island with its history which comes alive with collections of cushions, tapestries and table accessories with a strong expressive power. The material is modelled in the decorations and colours: the porcelain plates are defined by bold brushstrokes of red and shades of grey and blue; the painted lines of the cushions, tapestries and table accessories are adorned with the traditional Bosa filet and the mucadore shawls, made with silk threads, which are enlivened by a wide palette of colours.

The objects of the Botteghe Su Gologone in Oliena preserve a narration that is intertwined with history, whose ancestral signs and Mediterranean inspirations can be seen in the fabrics and ceramics. The suggestions of its native land can be seen in the woolen rugs with bright colours where, on monochrome and lively backgrounds, signs are discovered that refer to ancient traditions.

Le Botteghe Su Gologone offers two new collections of decorated cushions: Linea Blu, with stylized schools of fish in a lapis lazuli sea and Linea Trama where white is combined with hints of North African style, which is typical of the Sardinian artisan tradition. Giovanna Palimodde’s table is enriched with a new line of dishes, Murano, characterized by the geometric pattern typical of the island. The collection was made in a particular glass tempering which makes it solid and shiny like ceramic.

Bookstore in 798 Art Zone, Beijing. Conveying the memoir of its Jewish American heritage

Architect He Wei’s design philosophy is to not have one. «We do not want to use the architectural language and form that has been applied in prior works»

A reinterpretation of structures, reminiscent of the Nabataean community which occupied the area over 2000 years ago. Guests learn to alleviate their footprint through Six Senses’ zero waste philosophy