Directed by Jonathan Anderson, the ‘Show-on-the-Wall’, stems from a desire to discover formats of communication that respond to the times we are living in

Seven years at the helm of Loewe, Jonathan Anderson innovates with presentations that embrace the craft of fashion and the fascination of formats from season to season.

Following the footsteps of the men’s Spring-Summer 2021 ‘Show-in-a-box’, which was toying with the idea of miniature, the designer chose to present the women’s SS21 collection as ‘Show-on-the-Wall’, exploring the possibilities of a paper show at a 1:1 scale. «The aim is to embrace the excitement of change while involving the viewer in an experience that differs from the traditional fashion show».

‘Show-on-the-Wall’ features a collaboration with British artist Anthea Hamilton who has previously collaborated with the Maison and created a wallpaper for the Loewe Women’s SS21 line. Working in sculpture, installation, and performance the artist is intrigued by the meanings and resonances an image can provoke. Her Vulcano Table (2014) is part of the Loewe Foundation Art Collection and is exhibited in the Casa Loewe store on London’s Bond Street.

Delivered to the doorsteps of the show audience, the ‘Show-on-the-Wall’ arrived in the form of an artist’s portfolio, one of its faces screen-printed with an archive image by Steven Meisel. When opening the portfolio, one finds a letter from Jonathan Anderson affixed, containing a collection of sixteen posters, each depicting looks and characters from the SS21 line as well as one featuring a still-life arrangement of accessories, silkscreen printed with fluorescent, phosphorescent and metallic inks. The cast represents a cross-section of ages, gender, and body types.

The portfolio is accompanied by a series of tools including a canvas tool bag, a roll of wallpaper depicting the looks from the collection, wallpaper glue, a brush, scissors, a ceramic disc infused with Beetroot scent and a catalog raisonné. By utilizing the tools included in the box, its recipients are encouraged to engage with the collection and materials on a personal level. The observant is invited to paste the wallpaper, cut the models silhouettes, and paste them onto the background, completing it with the wallpaper border. «It creates a language that transcends the constraints of the fashion show», states the official press release. As a complement, the sheet music for Thomas Tallis´ Spem in Alium is included.

LOEWE stores around the world will feature the Show-on-the-Wall imagery in the windows.

The collection itself played with volumes, silhouettes, and proportions. Anderson embraces escapism by putting the pleasure of playing with fashion to the fore. Designs see spiral shapes, balloon sleeves, or skirts. Tulle is being utilized to encase outer layers, giving Ballerina hints, and supporting a sense of elongation. The sharpness of tailoring counterbalances feats of showmanship. Therewhile accessories explore the Loewe classics: sequin-embellished Puzzle bags, Flamenco bags with knot detailing, Balloon bags featuring elements of deconstruction, and a new shell shape.

The collection emphasizes Anderson’s excitement of change, evaluating the traditions of fashion and influences of the new. 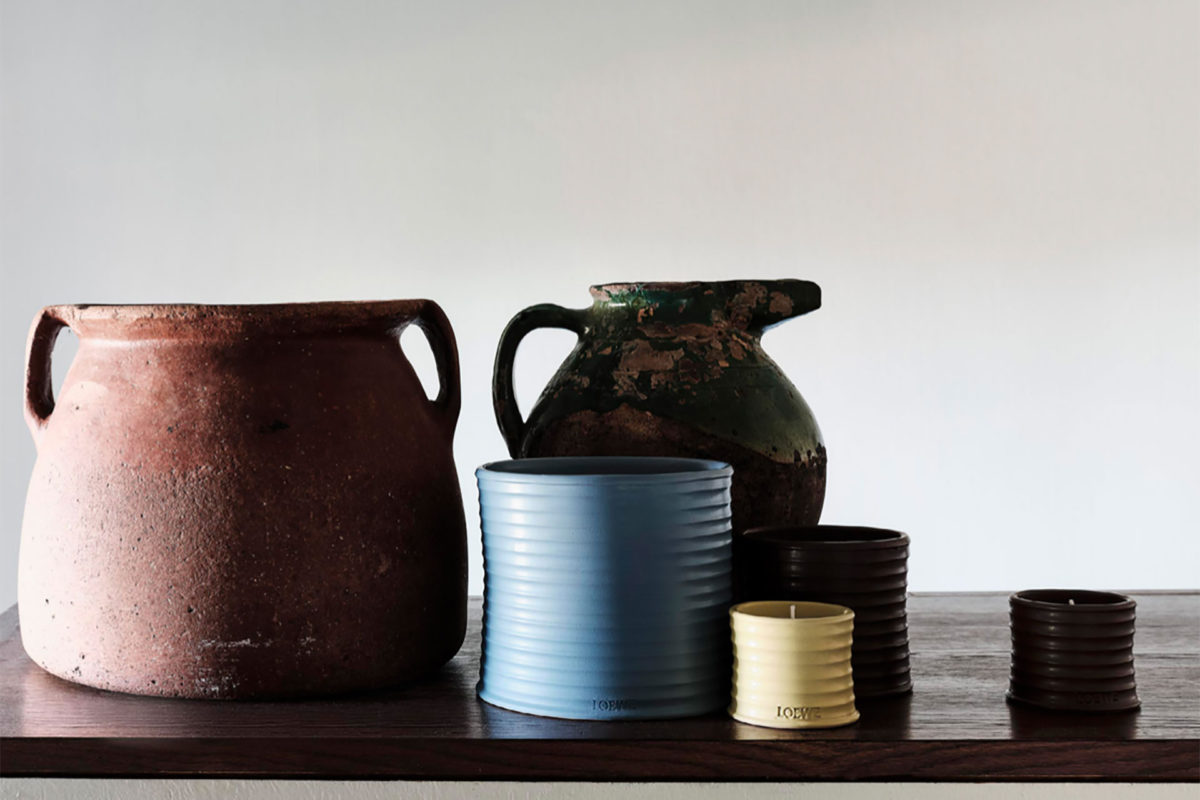 A dialogue between scent and ingredient, inspiration and outcome

Loewe launches a plant-based home scent selection. «There is an intimacy and coziness, but also a celebration of the natural world, to these candles that I find both timely and timeless»

J.W. Anderson thinks out of the box and unveils Loewe’s show-in-a-box concept to present the Men’s Spring / Summer 2021 collection – favoring the involvement of the spectator