It was the time of the crusades and of the Investiture Controversy. Years of misogyny were endorsed by heads of the church: women were considered inferior, prone to sin. It was men’s responsibility to dominate them. What was feared most in women was the power they had to ignite desire — a threat to masculine virtue. Eleanor of Aquitaine was one of the most powerful women of her time. After her death in 1204, at the age of 82, she was depicted over her tomb with a book in hand. Praised by musicians and poets as «Alienor with the golden hair», she was named queen twice, mothered ten children, and became a controversial figure in an era of female silence. Born in Bordeaux in 1122, she was raised in the court of her grandfather, William IX of Aquitaine. The Aquitaine court was the center of European culture, and here Eleanor, despite being a woman, studied art, literature, Latin, and mathematics. At just thirteen years old — with the duchy of Aquitaine, Gascogne, and the county of Poitou as her dowry — she was wed to King Louis VII of France.

Eleanor — beautiful, cultured, and uninhibited — challenged French bigotry, exemplifying scandal with her sensuality, lovers, and desire for independence. English monk William of Newburgh considered her responsible for the failure of the second crusade as Louis VII, «possessed by a violent passion for his wife», brought her with him to battle — other noblemen subsequently followed suit. The wartime energy was extinguished in sex and the army of Christ was overcome by immorality. In Jerusalem, when Eleanor became the lover of Louis’ uncle, preachers called her «a woman without decency, a foolish female, the devil». Monk Alberico wrote of her «indomitable propensity for lasciviousness, as is want of her sex», maintaining that Louis left her because of her sexual incontinence, «in fact this woman did not behave like a queen but rather like a whore». At thirty years old, Eleanor requested the annulment of her marriage, using their degree of blood relation as justification.

Three weeks later, on the day of Pentecost, she married Henry II, ten years her junior. After serving as the Queen of France, she was crowned Queen of England at Westminster, maintaining her autonomy of Gascogne and Aquitaine. A woman in power, she was free to grant political favors, however and to whomever she pleased. Her ability to govern on behalf of her husband seduced, among others, her uncle Raymond of Antioch and Geoffrey the beautiful, Henry’s father. Saint Jerome called her «a woman more bitter than death» . In her court, Eleanor encouraged the birth and popularization of the chivalrous novel — in which, for the first time in the western Christian world, love between a man and woman was portrayed in non-religious terms. She and Henry loved each other while hating each other, two heads of state with opposing political views. In the end, when her children were grown, she supported them in their rebellion against their father. Henry imprisoned her — too in love to execute her, but too weak to forgive her. For fifteen years he left her to starve in the English prisons, far from her children. Only after the king died did Richard Plantagenet, her most beloved son, manage to free her. Eleanor allied with him in the fight for the throne against King John. Buried in Fontevraud Abbey, her unconventionality left a permanent mark on the misogynistic and masculine world that she lived in, shaping the first image of the modern woman.

During the Middle Ages, challenging the patriarchy was at the foundation of any heroic act performed by a woman. It meant taking your destiny into your own hands rather than allowing men to determine its course. Enlightened women who believed they had more right to govern than their male counterparts; women fighting to defend their honor and faith. History often condemns them as arrogant, lascivious, cruel, but the history that we read was written by men. What would these women say if they could talk: Bloody Mary, daughter of a father who had her mother decapitated; or Joanna the Mad, wife of a violent and unfaithful man? The spinel is a gem that represents courage — deep red with orange nuances. The Cavalière necklace, an amulet in which the spinel is cut in such a way as to contrast with the diamonds that surround it, is Louis Vuitton’s tribute to these women. Joan of Arc burned at the stake — a concubine of the devil — while historians describe a crazy visionary. Matilda of Tuscany refused both the veil and exile, fighting alongside the men that she was forced to marry, and mediated the political battle between the church and the empire — yet we hear only the story of a man, Henry VI, kneeling for three days and three nights before Canossa Castle in Reggio Emilia: Matilda reduced and relegated to the role of “lady of the house”. How many were forgiven for their intelligence, culture, and ambition? How many of them truly were cruel and how many of them were forced to become so? Riders of the Knights — Medieval Heroines pays tribute to those women who, in dark times, chose to transcend the laws written by men. This is the first luxury jewelry collection designed by Francesca Amfitheatrof for Louis Vuitton.

We imagine them dressed in black, with hoods and long, sinuous robes that mock modesty by exalting the shape of the body. We imagine them laughing at masculine vanity. The Royaume necklace was inspired by the gorget — a piece of armor made from thick metal mesh designed to protect the throat. A blue, 19.31 carat sapphire — a symbol of protection — stands out against a web of 1,600 diamonds. Contours that recall medieval architecture — chains, fortresses, drawbridges. In symbolic imagery, cards, and tarot, the queen represents independence and control over one’s destiny. She can be black or white, Mary Magdalen or Bloody Mary. Nine Santa Maria aquamarines, with a combined weight of 153 carats, make up the Reine necklace, with handmade settings. It took months to craft the jewels, weaving the web of diamonds, and assembling the sixty sapphires and one hundred emeralds that encircle the neck. 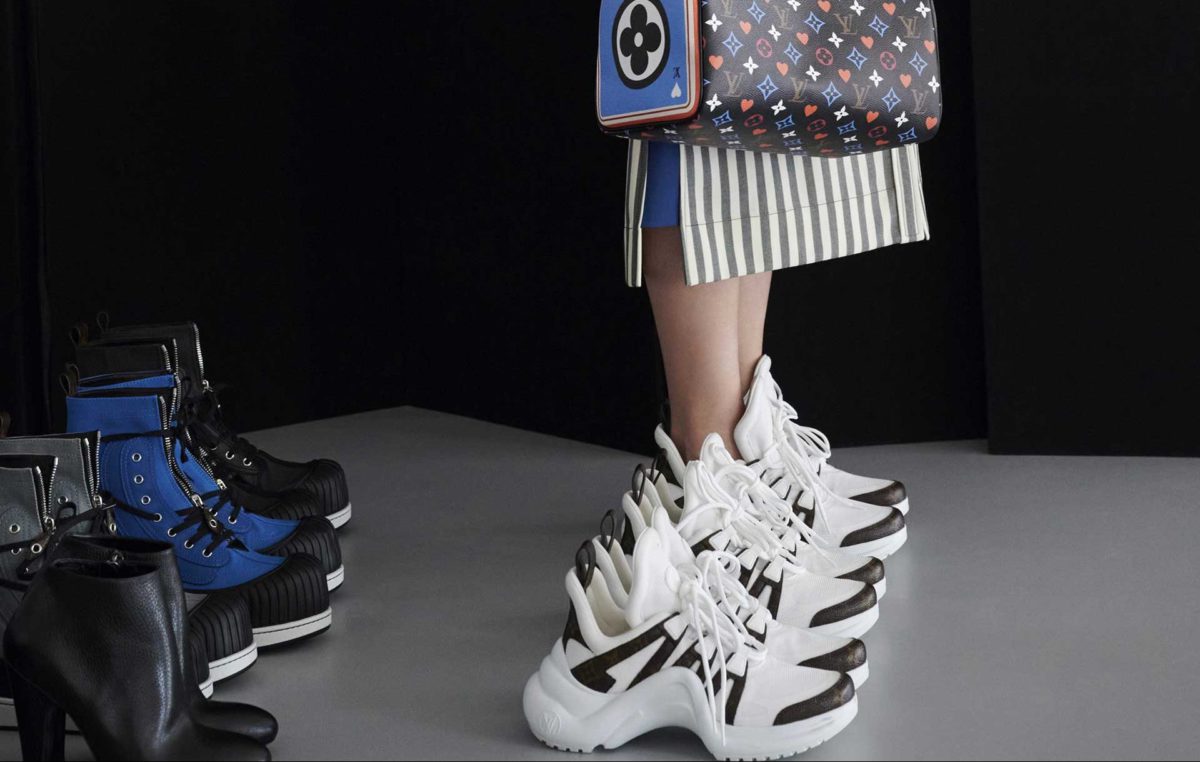