What remains of the 2010s? As we enter the new decade in a climate of uncertainty and a pandemic just a couple of months in, we can’t downplay the impact of the past decade in terms of design and visual culture. While, as far as fashion is concerned we mostly saw nods to nostalgia, both in terms of eras (hello, 1990s) and a lifestyle (see the rise in ‘modest’ fashion and the longing for an a-temporal dimension), design ran the gamut from post-industrial grit to light, airy, and sterile minimalism.

A lengthy essay in The Cut, ‘Will The Millennial Aesthetic Ever End’? dissects it thoroughly, singling out non-threatening minimalism made of muted pastel hues, sans-serif fonts, rounded edges, and sparse, but cutesy language.

Journalist and author Kyle Chayka, who recently penned the book The Longing for Less, an examination of minimalism in lifestyle, the arts, music, and Japanese culture, has been observing and documenting  the signifiers of taste for the this decade.

«Every reporter or writer has some kind of beat, and I think mine has become, how tastes form and what drives these kind of influential people or tastemakers,» he told me on a recent phone call during self-quarantine.

«The first thing I did that was on this path was the profile of Kinfolk magazine,» says Kyle Chayka, referring to a piece of cultural reporting and criticism that appeared in Racked in 2016 which examined Kinfolk’s being an influential proponent of a kind of ‘hipster minimalism’ that pushed the purpose of an elegance originating from living simply.

«What I was interested in at the time,» he said «was how did tastes develop?» That one magazine could be found everywhere and was influential in different places and had its founders and editors «kind of profiting from their own taste».

The taste of the 2010s was not necessarily aspirational in a way that conjured material wealth. Back in 2016, Chayka observed a predominant taste in tech and creative hubs worldwide, from Bangkok to Berlin, from Los Angeles to Tel Aviv, that he rechristened as ‘Airspace’ in his feature ‘Welcome to Airspace’.  The name is a reference to the then-predominant aesthetic of AirBnB listings which, we might remember with fondness or eye-rolls, adopted a mass-produced but overall tasteful decor, reminiscent of a more refined version of an IKEA catalog, but not too aspirational.

In fact, it reflected the tastes of a new intelligentsia, a creative class that was influential, cosmopolite, location independent, cultivated, but not necessarily wealthy. «They don’t have as many resources or they don’t own real estate or whatever, but these kinds of people are thinking about, what is cool right now? Or, what is more cutting edge?» This makes them tastemakers in a way, which, in turn, causes the more affluent people to look up to them «They’re kind of looking for these this class to think about what’s cool and how to live interestingly».

His book The Longing For Less expands on this concept. It consists of four seemingly independent sections Reduction, an examination of lifestyle minimalism through the influential work of Marie Kondo; Emptiness a survey of minimalist visual arts, from the likes of the Glass House by Philip Johnson and the oeuvre of Donald Judd; Silence, a survey of minimalist composers such as John Cage, Brian Eno, Julius Eastman, and sensory-deprivation tanks, and Shadow, which chronicles Chayka’s lifelong fascination with Japan, an inherently minimalistic country and its embrace of shadows both visually and metaphorically.

Method-wise, it resembles a curatorial project. Chayka started his career as an arts writer. «I love the storytelling of art history, like who were the artists and what were they working on, and I was drawn to it as a writing subject».  He wanted to be a curator at first. «They decide what to contextualize, how to contextualize it and how to communicate cultural ideas to a wider audience».

While being a curator may now be in trend, it’s not as simple as cobbling together content. «There is a need for people who pick and choose things right now, because we’re dealing with such excess for information, data, and images» Chayka pondered «So the task of curation is really important. Curators do a lot more than just like picking which images better».

Chayka tied the chapters all together towards the titular Longing for Less: through the lens of Instagram blogging, the examination of the works of Judd, Eno, and the likes and through an appreciation of the teetering between clarity and ambiguity in Japanese art, and literature, Chayka highlights how, underneath it all, the everyday minimalist of the 2010s longs for a form of reprieve, if not purification.

«It’s almost like absolving yourself of your sins in Christianity,» he told me.  Sure, it’s a user-friendly asceticism that we can also find in the works of Marie Kondo, who rose to fame with The Life-Changing Magic of Tidying Up, which combines a draconian purge of one’s belongings with one of the main tenets of her religion, namely that everything has a spirit (at the end of your spree, you have to thank the discarded object for their service).

It’s also an assessment of American society, as seen from the point of view of someone who grew up in a rural part of Connecticut. «The United States is vulnerable to the charms of minimalism,» he acknowledged in the book. «Something about our belief in the power of self-definition and starting over suggests to us that if we only sweep our floors we will magically become new people, unburdened by the past. Maybe it started with the iconoclastic act of throwing tea off the boat in Boston harbor».

For American millennials, minimalism is also a natural antidote to the post-2016 reality, when Donald Trump, the embodiment of 1980s opulence and excess, rose to power. «He’s so powerful and prominent, and as such a symbol of that lifestyle, the people who are against that, like the kind of liberals, especially the liberal intelligentsia, want to define themselves as the opposite of that,» Chayka said.

Towards the end of our chat, Chayka himself acknowledged that minimalism and the millennial embrace thereof might have lost its muse. As a word, it is now ubiquitous, to the point that you can see it appear, in a bedazzled script, on tshirts too. «When a word or style spreads everywhere, it tends to lose its original meaning,» he wrote. Case in point: there are more than thirteen million posts tagged with #minimalism on Instagram.

On top of that, Kim Kardashian and Kanye West showcased their fully minimalist mansion, which managed to combine asceticism and 80s excess. Kinfolk Magazine, which spearheaded Chayka’s pursuit into what defines millennial taste, evolved into a magazine promoting high-end fashion and design. And the monoculture of the 2010s, Chayka examined in an essay for Vox, was, in its algorithmic fragmentation, poised towards entropy. 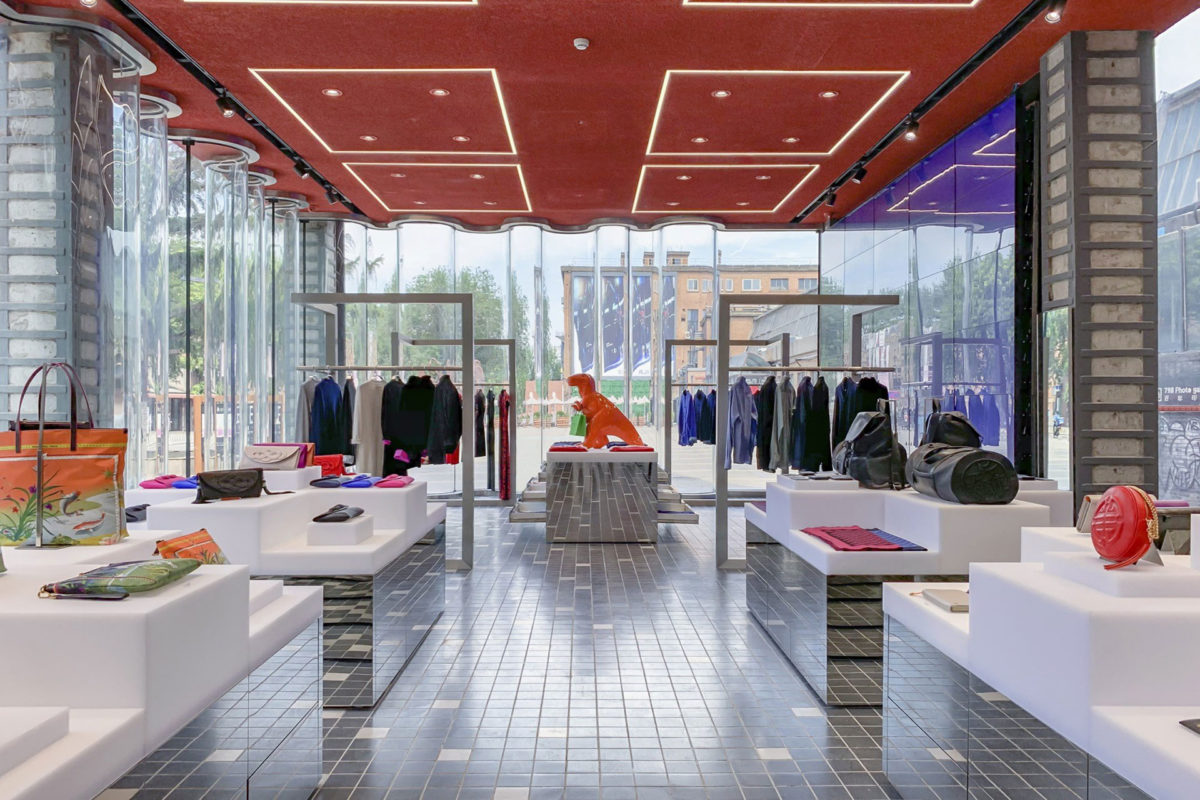 Split into two floors, the ground floor is dedicated to the merchandising, but also to the limited-edition artworks, that let visitors bring a piece of art directly home