Nostalgia is a form of energy that, in Forte dei Marmi – when the sky is clear in May, the sea looks like an ocean, the Apuane Alps turn into crystal – becomes glorious

Giuseppe Colombo and Titti Maschietto are longtime friends: two young friends and two adults, capable of perceiving such glory from every bark veining, from every maritime pine, from every shrub in Versilia. A few years ago a tornado knocked down most of the pine forest: thirty five pines fell in the garden of the Augustus, Titti Maschietto planted forty new trees. Giuseppe Colombo is the soul and driving force of Gallo. About two decades ago, Giuseppe happened to deal with the production of formal, dark socks: from there he has created a way, before than a world. Socks that come in any possible color, in stripes, and on those stripes Giuseppe posed swallows, florals, fans and palm trees, seamlessly, yesterday is tomorrow already. Socks are not just a complement to clothing, they become a detail, we all know what detail means in clothing. We were saying he created a way, then a world: besides socks, the brand produces ties, hats, sweaters and scarves and – of course, swimsuits, too.

These few lines were inspired by a swimwear line that Giuseppe Colombo has designed and produced playing with blue and red stripes on white. And these colored stripes are none other than the iconic trait of the Augustus – the historic hotel, for many (and even more than many) the only true hotel in Forte dei Marmi – directed and informally run by Titti Maschietto. On the Augustus alone I could write countless pages, halfway between Camilla Cederna and Lina Sotis, I hope I will have the chance.

At 2.00 pm, which is lunchtime every Saturday morning in Forte dei Marmi, we sat with Giuseppe Colombo and Titti Maschietto at a table set up and laid on the beach, below the white sails, our swimsuits were soaking wet after our first swim, we had a wool jumper to keep warm in the May air. We ordered a tepid fish salad with a little green salad to the side, making sure it did not cover the taste of the fish: we know well that to savor that salted water taste, the taste of clams fished every morning, you need to hurry up.

We talked about Forte dei Marmi, and although what we were discussing was very clear, words did not seem enough to explain to the other guests sitting with us. Not a place, not just a world, but, in fact, a way. The bicycles, the scent of pittosporum anticipating that of jasmine. The market held downtown every Wednesday morning, the jellyfish you could move away with your hands, swimming to the buoy. The colored wooden paddle boats. The closed wardrobes, the garments and shoes you found there again, from the last season, a thick, coarse cotton, heavy with humidity and moth balls, with the darkness that only in June dries up a little and then gets wet again, with the first summer downpour, with the drops of a puddle that reflects the light – the light only, no marvelous rainbows here – no wowing, we don’t want to be amazed, here in Forte dei Marmi, we just seek tranquility. Forte dei Marmi is a way to silence and love, courtesy and respect.

We never hinted at, or referred to, the Capannina. We did not talk of when, amidst the words, the smiles, the sighs, at the Capannina a scent of sweets lingered in the air at 1 a.m., a scent of cream and chocolate soufflé, the barman donning white gloves, the gin tonic glass with a mint leaf, the red and green sofas, the dim light, the rattan chairs. The Capannina was open all summer long – if you walk by the club now, on a Monday in July, you will find nothing. Once there was Otello, it was a real challenge to get in – the shirt, the stylish shoes, with the exception of leather boat styles. Forte dei Marmi was the solace of a solid, hard-working social class, that bourgeois class that had brought Italy to its economic boom – no place for social climbers, for volatile or fleeting riches, for not so fortunate estates. The current owner, Gherardo Guidi, did not want to preserve any of this – or maybe he simply wasn’t capable to.

All of a sudden, a downpour would wash everything away. The first time we went fishing, and the friends at Gino Paoli’s bar would smile from a nearby table when we got up to take our bicycles out of the rain, saying we are tough here in Forte dei Marmi. Nostalgia is a form of energy. The villa of Admiral Morin – land allocation was granted to the fleet commanders of the Royal Marine – is now inhabited by Fabio de Michele who every year has a holly oak pruned in order not to obstruct the sea view – the holly oak branches out to the sides, but does not increase in length (I guess the readers will remember that the shadow cast by a holly oak is the thickest nature can generate with a tree). Riding our bikes to the house of Carlo Carrà, the futurist, the painter, part of that art and literature society that populated the pine forest from the sea to Pietrasanta – a kind lady, his granddaughter, opened the windows of the artist’s studio: the red, blue and light blue tile floor, the yellow, old fabric of the sofas and still rough material, the 50s style green glass table tops.I would like to, and I could, write tons of pages on Forte dei Marmi – the Augustus, the streets, the hedges and the wicker baskets, the Maggi bicycles and the hard, salted focaccia, the blackberry bushes– on all that Forte dei Marmi still represents for Italian style – as I was saying before, there will be other occasions. I believe that’s the meaning of fashion journalism today: evoking images with words, manipulating memories, to portray the creativity of a fashion house, of an Italian textile brand. The beach, a swimsuit and the hues of the cabanas, a hotel and a family house, the studio of Carlo Carrà and the tiles in contrasting shades, the pittosporum and the red geraniums on the window sills – in Forte dei Marmi, in May, it’s still a little cold at night, so we wear a pair of socks. It is so obvious this piece only aimed at illustrating the art of Gallo. 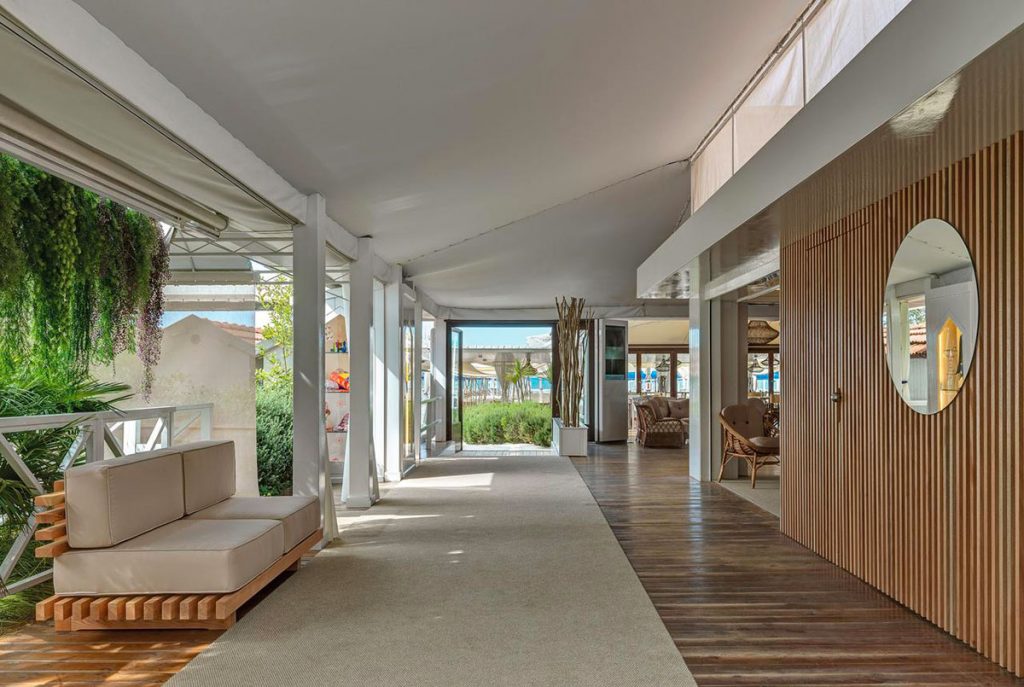