The philosophy of Ikebana — flowers as companions during these times

The floral industry is worth an estimated 64.5 billion euros. The philosophy in which Ikebana operates draws a difference to the polluting practices of the cut flower trade

Blooms available for purchase in Europe and America are cultivated elsewhere as eighty-percent of flowers is directly imported from countries such as Vietnam, Kenya, and Colombia to name just a few. The Netherlands is one of the world’s greatest exporters of cut flowers but since the nineteen-nineties, a majority of the flowers found in Europe have come from East Africa. Arrangements in the West typically appear as bold-looking things — a bouquet arrives in bloom as it was primed to perfection at the neighborhood florist — it gazes its recipient straight in the face upon delivery.

For an industry worth at an estimated figure of 64.5 billion euros, the scale of consumer demand is obvious thus the environmental impact linked to the intensive farming needed for fresh flowers cannot be underestimated. The carbon impact from the transportation of blooms from one end of the world to the other, the hidden environmental costs of bouquets in the Western world must be recognised. In contrary to full-frontal flowers with a destructive effect to the environment, an art form originating from Japan called Ikebana is dedicated to a more careful approach where it is not unusual for an arrangement to be void of a single flower. The philosophy in which Ikebana operates draws a stark difference to the polluting practices of the cut flower trade that has continued to flourish for centuries in the West.

What can an ancient craft like Ikebana teach us, urban dwellers, as our environment continues to decline? One thing is certain and that is to go back to nature itself. Modern Ikebana practitioner and a well-respected one at that, Toru Watarai views flowers as «a memory of the land» and the land continues to change and its flowers along with it. «Doing Ikebana with the flowers of the land inevitably leads to the protection of the diversity of the plant. Plants, nature, and humans must work together».

Plants have constantly held a unique role in the Japanese Shinto religion and the art form of Ikebana possesses spirituality since its inception as it began at alters of yore where flowers were placed and offered before the gods. It was Japan’s eighth shōgun, Ashikaga Yoshimasa who declared in the Muromachi period of Japan that flowers presented to the holy should be imbued with much time and thought. Together with Toru Watarai, we unpacked the lessons this pursuit, which was a genteel pastime of the Japanese upper echelons in the past, of «making flowers alive» can teach us in the twenty-first Century. 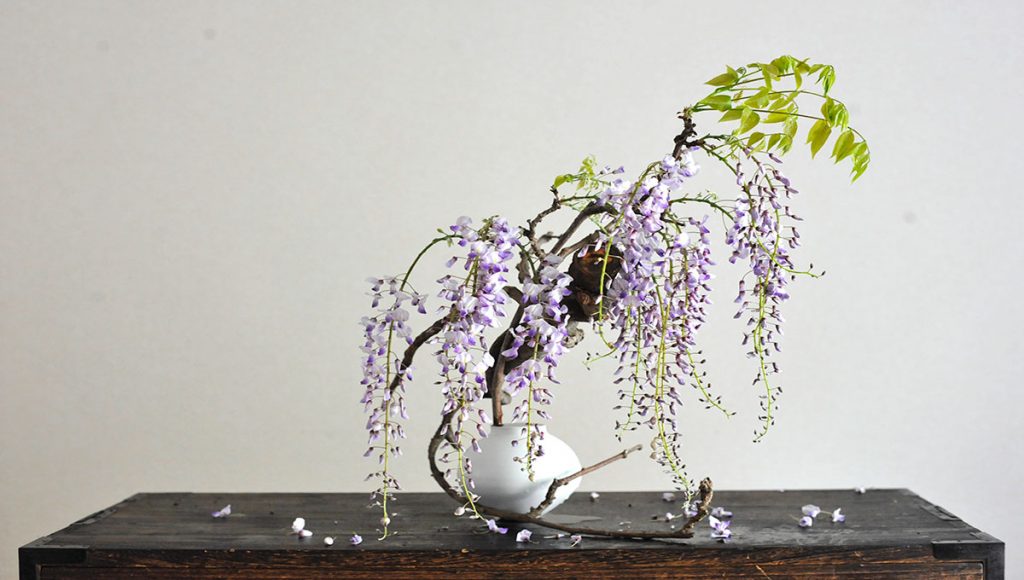 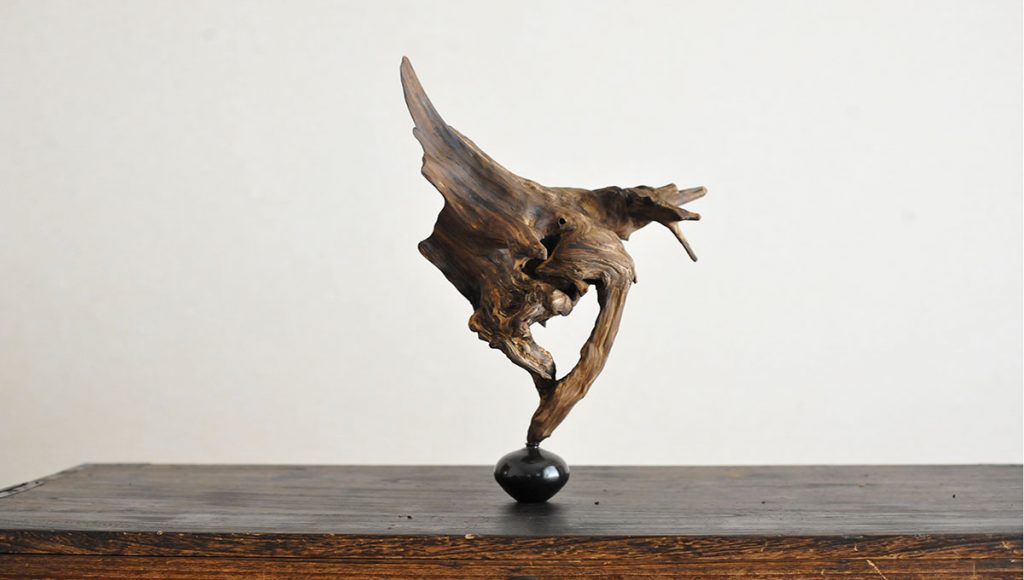 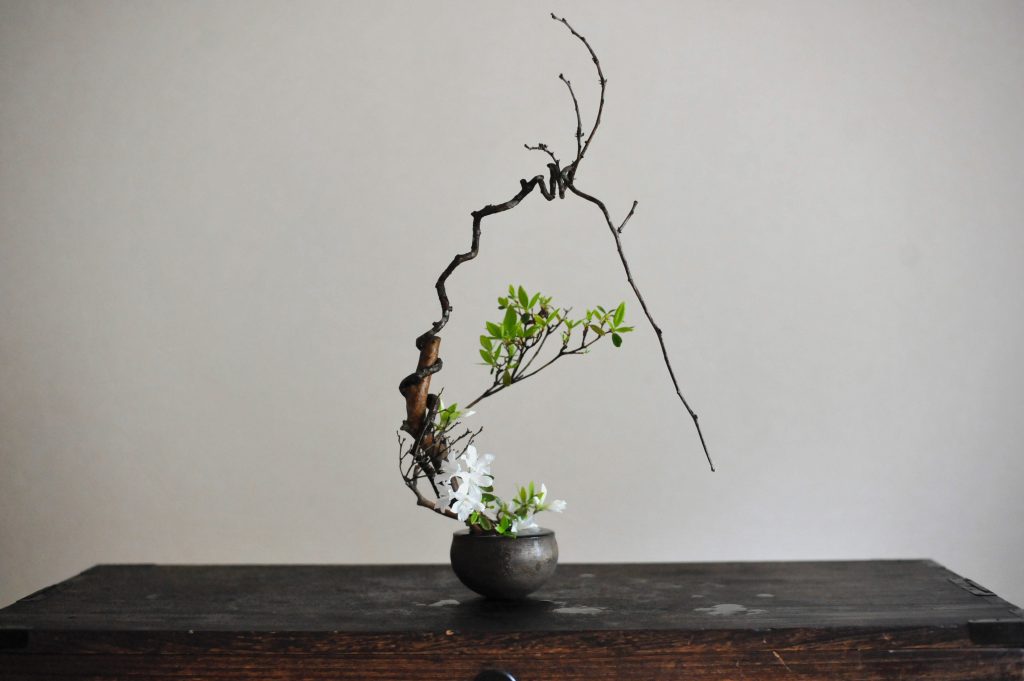 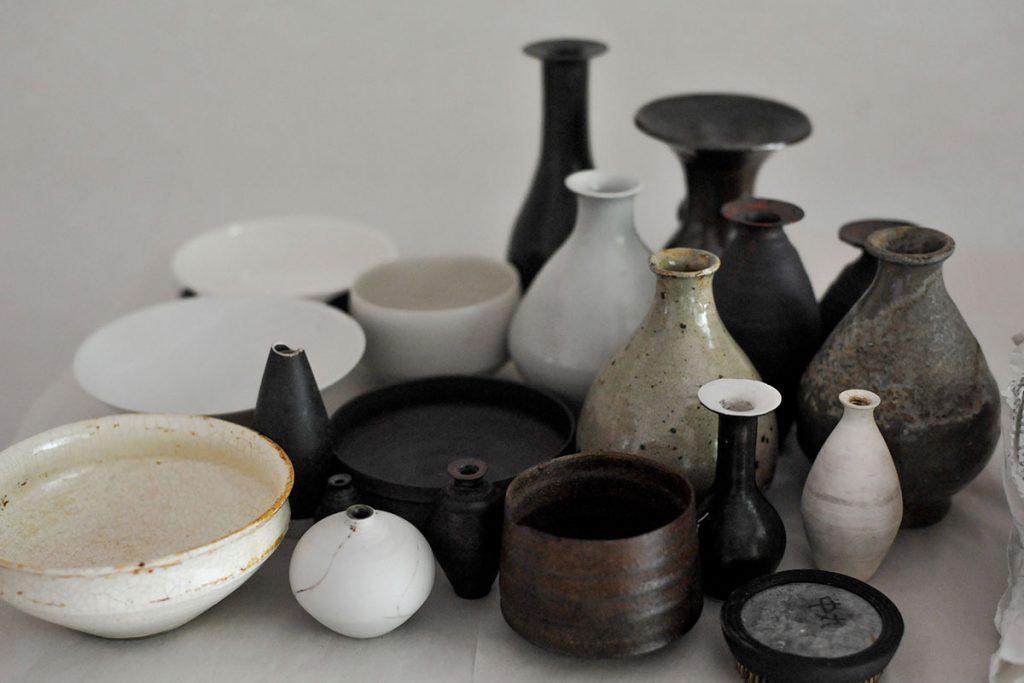 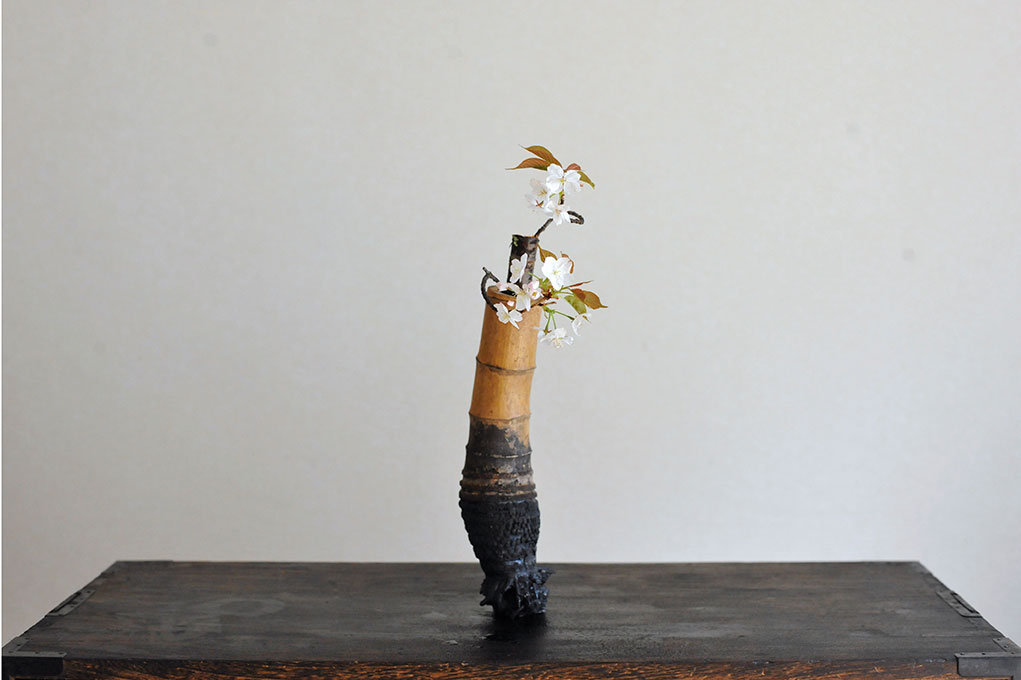 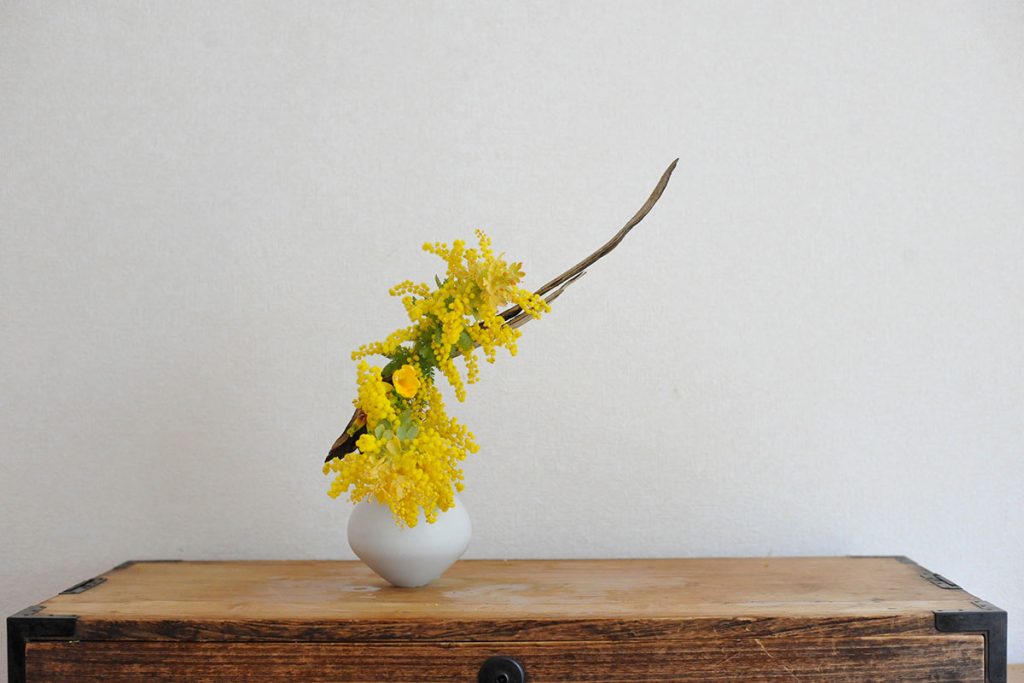 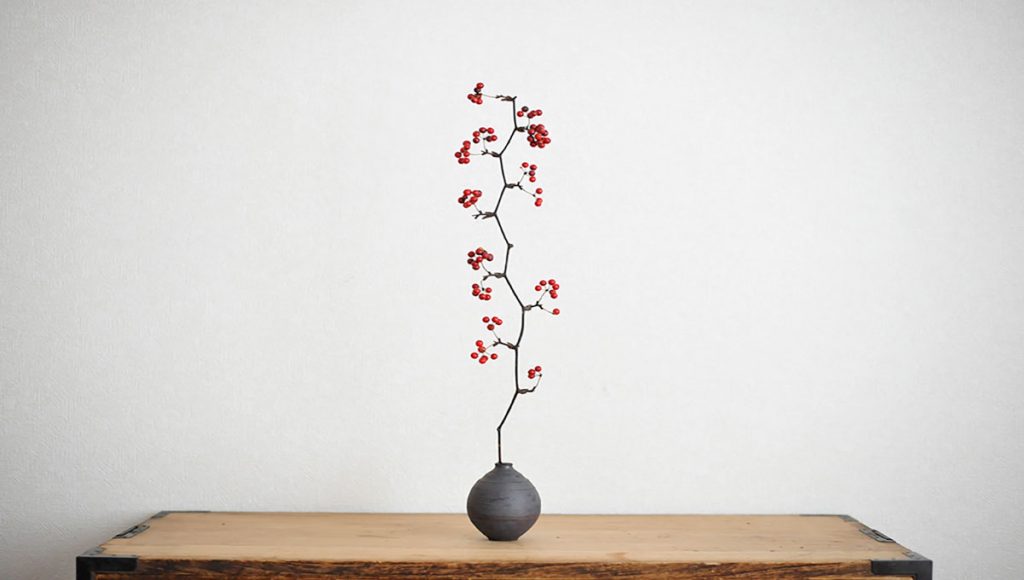 A year ago, Toru Watarai was initially managing a flower establishment in addition to running Ikebana workshops of his own in the commercial district of Aoyama in the capital of Tokyo before making the decision of moving to the seaside city, less than an hour south of Tokyo, called Kamakura. It is with this move that Watarai felt that he has only grown closer to nature which has benefited his work in creating Ikebana. «I could find every flower in Tokyo, it was all always in season but since moving to Kamakura, I am dependent on nature’s bounty». The Japanese floral artist goes on to claim that being at the mercy of nature in this way is actually the basis in which Ikebana was founded.

Native flowers and plants, as well as specific seasons, are all infused with meaning in the Japanese culture. The Japanese use floral arrangements to convey the time of the year, an excellent example being the curves of branches is able to allude to the strong winds in March while it is common to spot a more refreshing yet low arrangement in the summer. This use and consideration of seasonal foliage in Ikebana according to Watarai is a way of appreciating «this very moment». The transience of blooms in this ancient craft is akin to mindfulness and the blooms in an Ikebana arrangement pay homage to the land in which it came from.

Watarai begins the process right in his home garden which then extends to a visit to his local landscape of Kamakura: the mountains, and its trails. Being able to devote time to appreciating nature and the local environment is key to honing one’s skills of bringing out the «charm of the plant» which has been one of Watarai’s key methods of improving his work: «I spend time in nature and through this, I accumulate the experience» he states. «Protecting nature is an idea spoken out of people’s convenience but the destruction of the environment is simply done by the human ego». And forbidden it is in Ikebana to bend nature’s will for human profit. Not only is nature considered but it must be appreciated in order to create something beautiful in the work of Ikebana.

Toru Watarai raises the idea of the destructive work of the ego, in it the ability to «impose our values on other subjects with which we have no relationship». In regards to the profitable flower industry, certain communities are affected as this trade is one of the consumers of pesticides in the world. Colombia, for example, uses twelve different pesticides for flower manufacturing while Ethiopia utilizes one hundred and twenty pesticides, including toxic chemicals such as methyl bromide.  This particular toxin results in a myriad of health problems in local workers and damage to local eco-systems — results unseen by the West and their avid customers. Drawing a difference with Ikebana here. Watarai creates Ikebana with local plants so that one is able to «experience the local climate» in which his pieces come from.

This ancient craft believes in «knowing contentment» and according to an Ikebana forerunner, the «flowers become yourself» — hinting that the beauty of an Ikebana piece is directly correlated with the creator’s awareness of his position in the state of the world. Flowers are not just seen commercially — it goes beyond. The triangular composition of Ikebana supports this idea as many pieces can follow a three-stem system of shin, soe, and hikae which corresponds to heaven, man, and Earth respectively. Watarai extends the notion further: «In Ikebana, the creator’s awareness of the beauty of nature and life is embodied. I combine this Japanese belief of a sense of balance with the creative expression of nature. Merging this belief together with design and visual merchandising, the work becomes different». Only with awareness and contentment, that beauty can be embodied in Ikebana.

The vessel that holds an entire Ikebana piece has its own charm and acts as a significant role in the formula of Ikebana itself. This attention of the vase as being something more than simply a container for flowers is an idea that is distinctly Japanese. Most vessels used in Ikebana are wide at the mouth as the surface of the water is thought to be the surface of the Earth, alluding that the plant is presented as naturally as it would if one were to see it in its natural environment. Unlike Western flower arrangements, the vase is often irrelevant to the actual bouquet as the vase does not hold the flowers in their positions nor impacts the work itself.

Watarai tells that he has been directly inspired by vessels and he considers it an element as important as the flower used itself. «The vessel is one of the elements that make up Ikebana, not only the flower and the occasion. All three are equal in all respects. If a vessel moves me, the inspiration comes from the vessel. There will be an overall balance of shape, texture and quantity after the vessel has been inspected in my hands from a bird’s eye view». Many of the vessels utilised for Watarai’s work leaves little footprint on the environment as he often uses decayed bamboos or deadwood, crafted brilliantly with his own talent.

Otherwise, the Japanese floral artist works closely with local ceramic artists that utilise traditional methods to create vessels often made from Japanese kilns. «The charm of the flower material is guided by itself into its own place, unto the vessel, with the scissors» – this is the kind of poetic outlook Watarai possesses when it comes to Ikebana. «The way in which the flowers are paired with the vessels comes from layered experience. Although the vessels are mostly simple in appearance, they own a physical balance and visually appealing tension. The vessel gives us a sense of gravity, which is closely related to living on the ground». Unlike Western habits of idly placing flowers into a vase, Ikebana considers all and works towards bringing out the beauty of the live materials in order to express a powerful emotion.

How does this ancient art form translate into the modern world and its future? Watarai acknowledges that the direct impact of Ikebana on society is limited however this should not be seen as an obstacle nor a weakness as Ikebana is merely a conduit that is able to present the beauty of nature through a visually-pleasing structure. Ikebana is a stepping stone towards cultivating respect and the desire to protect our living world. «My works are nothing more than raindrops on the ocean but a presence that creates gentle ripples. Eventually, it will become a cloud that is able to quench someone’s thirst and that’s why I strive to bring out the best in the flower material in front of me. I hope to reach as many people as possible» says the Japanese floral artist.

Toru Watarai also says that not everyone needs to understand the intricacies of Ikebana but it is the experience that matters. Urban dwellers are surrounding themselves with more nature than ever before by having blooms in their private spaces. Staying home, according to Watarai, has given us the opportunity to really observe the flowers instead of simply living with it. We witness its life cycle personally and see its value. Flowers, nature, and Ikebana are able to act as a companion in these turbulent times. Times like these refine our perspective towards nature and helps us understand the transient aspect of flowers. Stefano Canali recalls the history of the family, the factory of his childhood, and the priority he was taught to always give to the human handmade 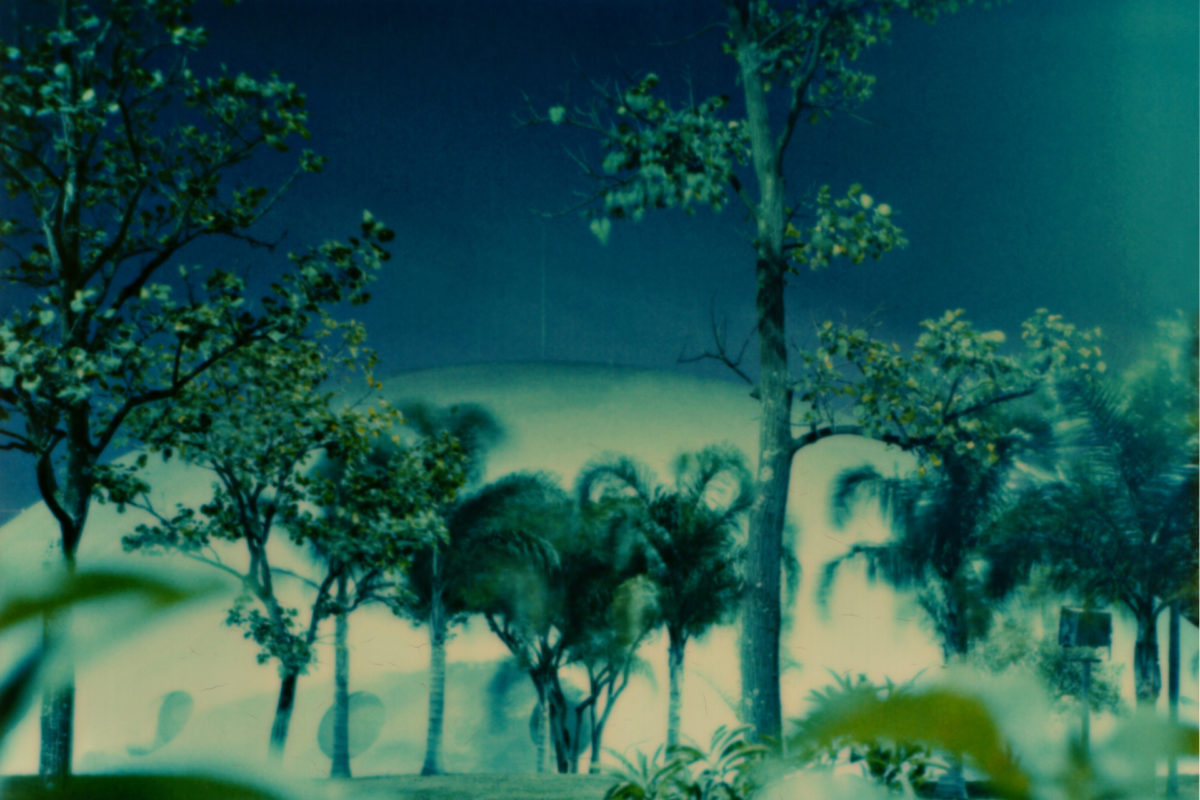